In England and Wales, caning pupils became especially common in the 1800s. Before this, the typical corporal punishment for pupils would instead have been birching, where the child is hit with a bundle of twigs. Prior to the 1800s, rattan canes made from the rattan liana – which does not grow in England nor Wales – were rather costly and difficult to obtain. Increased import from the British colonies in the tropics changed this in the 1800s. Caning pupils with actual wooden canes (walking sticks) have never been common in English and Welsh schools.

Notably, caning with rattan canes never really caught on in Scottish schools, with the exception of some private (independent) schools. Instead, the Scottish schools generally stuck to the old-fashioned locally made leather tawse, a strip of leather where one end has been split into several tails. The tawse was typically applied to the hand of the pupil, not the buttocks.

Could both boys and girls be caned? 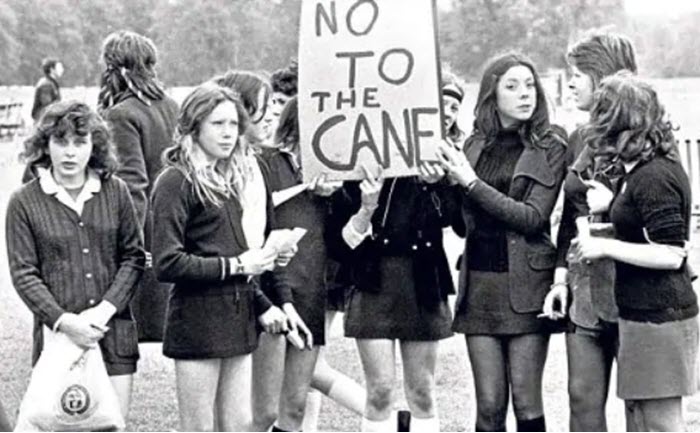 Yes, both male and female pupils were caned in schools in England and Wales in the 1800s and into the 1900s.

Was caning limited to state schools?

No, caning was carried out in both private (independent) schools and state schools in England and Wales.

Who administered the caning?

This varied from school to school. In some schools, any teacher could apply the cane, and it was common to cane a pupil in the classroom in front of the other pupils, to serve as a warning.

In other schools, only the headmaster or deputy headmaster was allowed to cane, and the pupil would be sent from the classroom to the headmaster´s office to receive the punishment out of sight from the other pupils.

Application of the cane

In English and Welsh schools, the cane was used to strike the hands, buttocks or legs. Caning the hand was considered more dangerous alternative, as it was more likely to cause serious damage.

A pupil that was about to be caned on their buttocks would be instructed to bend over a desk or chair, or simply bend over until their hands touched their feet.

While the old-fashioned birching had typically been carried out on bare buttocks and thighs, the rattan cane was capable of causing serious and lasting pain even through clothing. Thus, there was no longer any need to make the pupil expose their bare buttocks. Unsurprisingly, Victorian ideals were generally in favour of a punishment where the pupil could remain fully clothed. Even when struck through multiple layers of clothing, a caned pupil could expect to be tender for days, and it could take a long time for weals and bruises to subside.

“Six of the best”