Using the birch rod on children 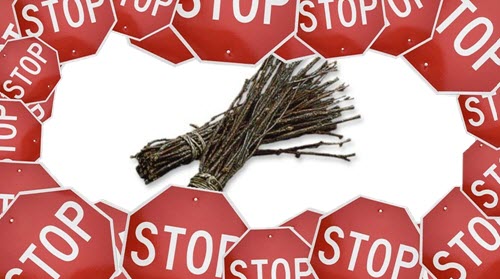 In the context of corporal punishment, a birch rod is a bundle of (typically leafless) twigs bound together. Hence, it is not actually a rod and it isn´t necessarily made from twigs of the birch tree either. It is also known simply as the birch, and hitting someone with a birch rod is known as birching.

For birching, strong and smooth twigs are preferred, and a variety of trees produce suitable twigs. The design of the rod will impact how much pain and damage it causes. Important aspects to consider are the length and circumference of each twig, how many twigs to include and the total weight of the rod. The “Eton Birch” used on pupils at Eton College did, for instance, consist of comparatively small twigs.

Some judicial systems have had rules or a strong preference about the design of birch rods for judicial punishments. On Isle of Man, the standard birch rod for judicial corporal punishments consisted of for our five twigs from the hazel tree. Certain British institutions designed several different birch rods and gave each of them a name. There was, for instance, the Senior Birch of the Dartmoor Prison; a 48 inch long birch rod only used to strike males aged 16 and above.

To birch a child

When a birch is used to deliver corporal punishment to a child or adult, it is usually applied to the buttocks, back and/or shoulders.

Small children are usually placed over the adult´s knee and the birch rod is used to strike the buttocks of the child. Older children are typically instructed to bend over a chair, desk or similar piece of furniture.

Eton College and several other educational institutions in England had a special wooden block available where the pupil was forced to kneel to receive the hits from the birch rod. In Scotland, some schools had a birching table to which the child would be fastened. The child would insert their arms into two holes in the table, and wait for their feet to be tied into position. Before the birching started, a strap would also be fastened above the waist to secure the child even more.

Horsing is a term associated with the birching of pupils on the British Isles. The child would be hit with the birch rod while being held by the arms over the back of another pupil, or held on the shoulders of two or more pupils.

Birching children in the Royal Navy

Before the 1860s, it was common to use the cat o´ nine tails to punish children serving on the Royal Navy ships. This practise stopped in the 1860´s and was replaced with birching, since the cat o´ nine tails had become so strongly associated with prisons. The birch rod, on the other hand, was something the children would already be familiar with from life on land.

Children sentenced to birching by the British court system

In the late 19th century, the British court system stopped sentencing boys and young men to whippings with the cat o´ nine tails. Instead, they were sentenced to strikes with the birch rod, a tool which was more associated with school discipline than with prisons, and deemed more suitable when correcting young offenders.

During the first half of the 20th century, fairly petty crimes committed by boys and young men could lead to birching in Great Britain. It was, for instance, a fairly common sentence for minor thefts. For boys younger than 14, a special milder version of the birch rod was utilized, one that was both smaller and lighter than the standard birch rod. In Scotland, this milder version was used up to the age 16. Another special accommodation for young offenders was to have the birching administered in private instead of publicly. A policeman would carry out the sentence in a private room at the magistrate’s court or at the police station.

Judicial birching (for both adults and children) was abolished in the United Kingdom in 1948. It was then brought back in 1962, but only as punishment for violent breaches of prison discipline.

Judicial birching of children in the Channel Islands

Isle of Man was one of the last jurisdictions in Europe to abolish judicial birching, which happened in 1976. The nearby Channel Islands Guernsey and Jersey also kept this punishment available long after it had been abolished in the United Kingdom, and teenage boys in Guernsey and Jersey could be sentenced to birching as late as the mid-1960s.