Belting and paddling are two common ways of administering corporal punishment when the punishee is a child. 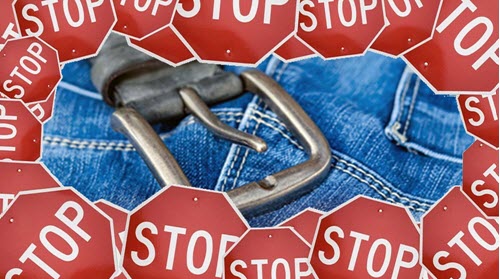 Traditionally, belts have been a common tool for corporal punishment of children, both in informal situation (such as a child being belted by a parent at home) or in more formal situations (such as formal punishments carried out in educational institutions).

A belt can be used in a whip-like fashion to strike any part of the body. Some of the most common areas for belting are the buttocks, thighs and back.

The punishee is typically instructed to bend over, e.g. over furniture or over the punishers lap.

The belt will behave more like a strap if it is doubled and the punisher holds on to both ends of the belt in one hand. This effectively makes the belt shorter and thicker. Using a belt in this fashion on a child especially common when the child is bent over the adult´s lap, since using a full-length belt is difficult in this position.

A full-length belt have a tendency to cause an uneven impact, with the tip of the belt causing more damage than the rest.

Some people simply hold on to one end of the belt when administering a full-length belting, while others wrap the belt around their hand before administering the punishment.

An especially painful and damaging form of full-length belting of a child is the one where the adult holds on to the tip of the belt and hits the child with the buckle-end.

Is there a difference between belting and strapping?

In some contexts, the terms belting and strapping denotes two different things. Belting is done with a belt (created to be worn as a garment) while strapping is done with a strap (created specifically to be a striking weapon). A strap is usually made from thicker and heavier leather, and have a handle and no buckle.

In many contexts, however, the terms belting and strapping are used as synonyms.

Both types of paddle consist of two parts: the blade and the handle or handles. Traditionally, both parts have been made from wood, although some schools in the United States are now using plastic paddles instead, where both the blade and the handle are made from plastic. A typical paddle intended for striking school-aged children will have a blade that is 1-3 feet long, 3-4 inches wide and roughly one-quarter of an inch thick. Some paddles have air holes drilled through them. This practice reduces air drag, making it easier for the adult to administer a faster – and thus more painful – strike to the child.

The paddling of children is strongly associated with the United States. In other parts of the world, other types of corporal punishment is – and have been – more common than paddling.